Intro to "the Hour of Code"
https://www.youtube.com/watch?v=nKIu9yen5nc&list=PLzdnOPI1iJNfpD8i4Sx7U0y2MccnrNZuP&index=21

With a partner, select one of the following games to work through. We are in the lab until 9:11 today.

​If you would like to work on your personal Android or iOS device, you can Make a Flappy Game.
https://studio.code.org/flappy/1

AT THE END OF THE HOUR, RESPOND TO THIS BRIEF SURVEY:
https://www.surveymonkey.com/r/JLYVW99 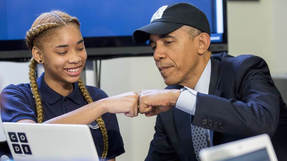 This week, across 180 countries, millions of people are learning new skills that can change the rest of their lives. The Hour of Code 2014 is already twice as big as last year!

Start your Hour of Code (<<---- click the link!)
Code with Angry Birds - with Elsa - with Flappy Bird

(The tutorials are available in over 30 languages and taught in 180+ countries, try one now!)

Halfway through the week, 15 million students have tried the Hour of Code around the world — including a pretty special student, the President of the United States.

Barack Obama became the first US President to program a computer, to show that anybody start learning computer science. And in a video message to kick off the Hour of Code, he urged every young person to learn more about how technology works this week. Watch him write his first line of code.

Thank you
I can’t believe our ambitious goal to reach 100M students is in reach. We’re seeing a sea-change in education and it’s thanks to the collective effort of 200 partners... and you. Your personal stories and support have made this the best job I could ever imagine.